Everything About SMTP or Simple Mail Transfer Protocol

SMTP or Simple Mail Transfer Protocol is a standard communication protocol for email transmission. Mail servers and other message transfer agents use SMTP to send and receive mail messages. SMTPs affect email deliverability and thus email marketing conversions. In this blog, you will learn what an SMTP is, its types, working, and configurations.

What is a protocol?

A protocol consists of a set of rules and procedures which govern the exchange of data between two or more devices. Protocols define how the transmission of data will precisely take place between electronic devices such as computers. They set the standard procedures for communication and the exchange of information.

The International Organization for Standardization established the Open Systems Interconnection (OSI). It is one such widely used Internet protocol that lays down the standard for communication over different networks. The model divides the process of data transmission into a series of seven layers.

Some of the important internet protocols are TCP/IP, HTTPS, DNS, and SMTP.

The Simple Mail Transfer Protocol is a communication protocol that allows the users on the same or different computers to send mails over the internet. It involves a particular set of guidelines according to which the communication via mail takes place. 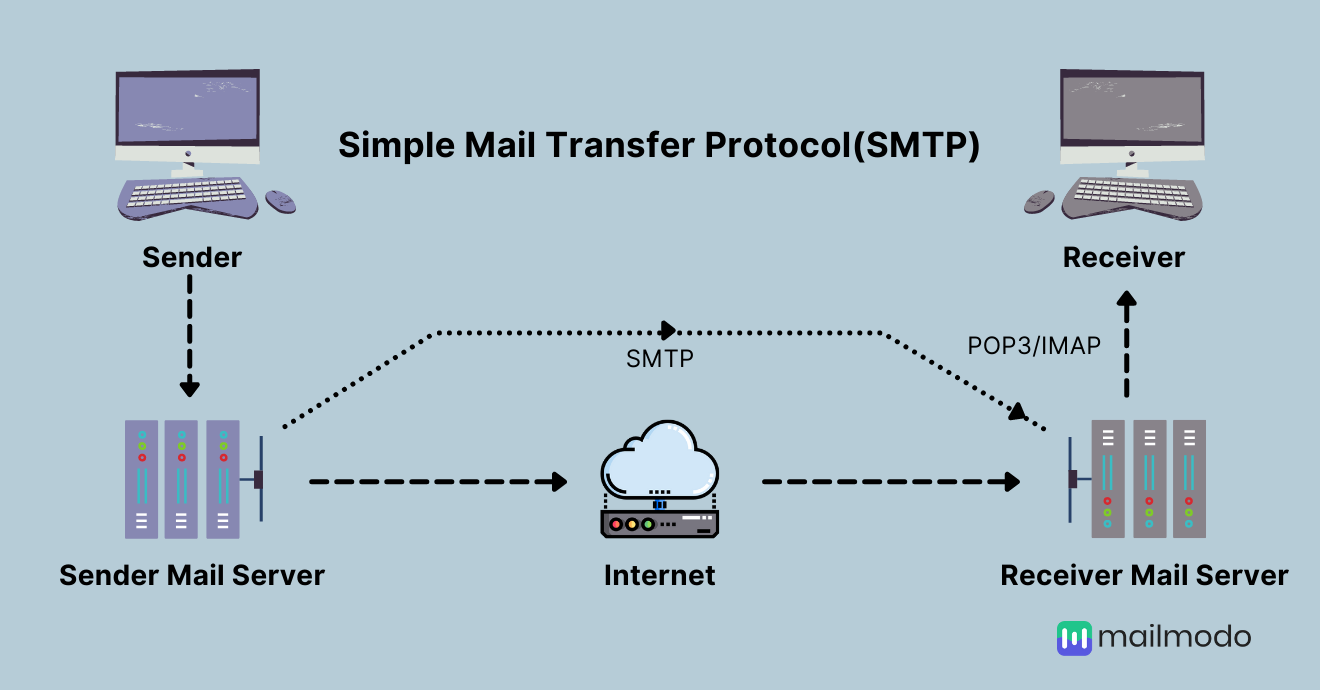 The importance of SMTP

SMTP acts as a push protocol by transmitting the mail on and across the networks. It comes under the application layer of TCP/IP protocol, where it works in a 'store' and 'forward' manner.

SMTP facilitates mail exchange over networks. After recognizing the respective mail address, it sends the message to one or more recipients. The user can send the mail in various forms, such as text, video, or graphics.

What are the components of SMTP?

There are two primary components of the SMTP client and server. The first is 'User-Agent, and the second is a Mail Transfer Agent.

The User-Agent (UA) is responsible for preparing, creating, and putting the message in the form of an envelope for transmission.

The Mail Transfer Agent (MTA) then transfers this message across the internet to the particular recipient.

The SMTP supports a more complex system by adding a relaying system in the process. Under this, more MTAs can be placed at either sending or receiving sides. If needed, then this relay system can use mail gateways and work without TCP/IP protocols.

The different types of

In the SMTP model, the client-SMTP starts the communication session, whereas the SMTP at the receiver's side responds to the client's request.

The end-to-end SMTP protocol helps to send emails to servers at various other organizations. This model acts as a medium of communication between different organizations.

After contacting the destination's host directly, the SMTP server keeps the mail to itself until the receiver's SMTP successfully receives a copy of the email.

How does SMTP work?

The Transmission Control Protocol (TCP) is the primary connection for communication between the mail sender and the mail receiver. In SMTP, the mail sender sends the data in the form of command strings over this reliable ordered data stream channel.

The SMTP client consisting of the initiating agent, sender, or transmitter initiates the communication session. It issues the command strings and opens the session for corresponding responses from the SMTP server, which involves the listening agent, or receiver. Zero or more SMTP transactions may be there in a course.

If a server sends 'reject' then it is a permanent failure, and the client needs to send a bounce message to the respective server. On the other side, a ' drop' is a positive reply, in which the message is discarded instead of delivered.

In 1982, one of the first MTAs to implement the Simple Mail Transfer Protocol, Sendmail with 4.1cBSD, was released. With time, it became a commonly used mail transfer agent.

At present some of the most popular SMTPs include Amazon SES, Sendgrid, Mailgun and others.

How are emails sent using SMTP?

The process of sending emails via SMTP consists of the following sequential steps:

With the help of an MUA, Mail Transfer Agent program, the user sends an email. The content of the electronic mail consists of two parts, header, and body. The former header is the subject of the message, while the body is the main content of the message. The sender and recipient address also comes under the header part. The header acts like an envelope holding the letter (message) in it.

The mail client (mail user agent, MUA) submits the email to a mail server (known as a mail submission agent, MSA) using SMTP on TCP port 587 or the traditional port 25. The MSA further delivers the mail to its mail transfer agent, MTA.

The two parts of an email address are the username of the recipient and the domain name. Let'stake, for example, mayank@gmail.com, in which 'mayank' is the username, and "gmail.com" is the domain.

In case the domain name of the recipient's email address does not match with the sender's domain name, then the mail submission agent (MSA) will send the mail to the (MTA).

Then, the MTA will search for the particular domain to relay the mail. To obtain the target domain, it checks the MX record from the Domain Name System. The MX record contains the information regarding the domain name and IP address of the recipient. Once it locates, MTA establishes the connection with the exchange server and relays the message.

After receiving the incoming message, the exchange server delivers it to the Mail Delivery Agent. It stores the email and waits for the retrieval by the user.

The user can access the MUA with the login and password. The MUA helps in retrieving the stored email from the MDA.

SMTPs are essential to send and receive emails. As an email marketer, you need to choose and configure the SMTP that suits your requirements. At Mailmodo, we provide easy SMTP setup and integration with any SMTP you might like to send your email marketing campaigns. Feel free to reach out to the Mailmodo team to learn more.

Convert your emails into experiences with interactive AMP elements

15 Email Marketing Mistakes You Might Be Making, and Ways to Avoid them

Sales Cadence Guide - A Framework that Gets You Result with Examples

Convert your emails into experiences
with interactive AMP elements