What Is API and How Does It Work?

Do you own a wireless speaker?

When you turn it on, chances are your mobile gets paired to it instantly. That’s because an API integrates your speaker with your cell phone, enabling the wireless feature.

But wait, how does an API work? Read our guide to understand how APIs, which are essential to building apps, function.

What is an API?

An API or Application Programming Interface is a facilitator that enables apps, databases, softwares and IoT devices to communicate with each other, without which they won’t be able to interact. It's a set of tools and protocols used by developers to build user-friendly software apps.

But how, you may ask? 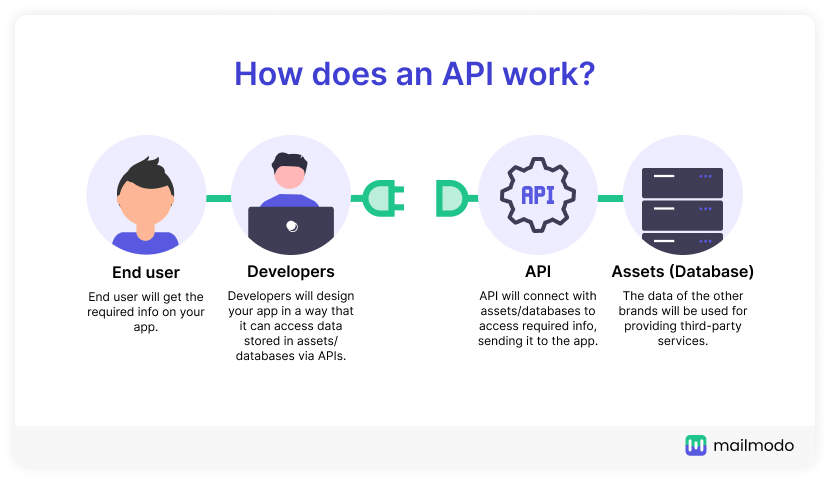 You can write APIs in various programming languages, including Python, Ruby, Java, JavaScript, and Perl.

Why use an API gateway?

Here are 6 reasons why you should use API to integrate web-based devices and applications:

Developers can add unique functionalities to their applications using an API to make app development easier, saving both time and money. APIs also enable flexibility, simplify app and email design, and generate chances for innovation when creating new tools and products or managing current ones.

APIs help business and IT teams collaborate by making it easier for developers to integrate new application components into an existing architecture.

Allowing consumers to access data using an API lets you integrate third-party apps. So long as the API's behavior remains unchanged, you can modify its internal systems without affecting your customers.

You can secure user data by determining the identity of your end-user and identifying the resources they can access. For example, in a REST API, basic authentication can be implemented using the TLS protocol, OpenID Connect or OAuth 2.

You can set trigger endpoints for journey emails using Mailmodo REST API and trigger automated campaigns from any external platform, including Zapier, Integromat, etc. For instance, you can send emails personalized to a specific event segmented based on event properties using a custom event API.

Public APIs add a unique value to your business by helping you monetize your data. How so? Let’s assume you’ve created an app that enables users to find books they want using a publicly available API. You can leverage the API to make more sales or generate other business opportunities.

Google Maps API is another great example of monetized public API. Let’s take a look at other well-known examples of API.

APIs can be available privately, publicly, in partnership or for commercial usage. They can also be classified as per the systems they’re designed, including operating systems, databases, remote access or web-based. We’ve talked about each one in detail below:

In-house developers can use private APIs to integrate a company's IT systems or applications. Even if the apps are made public, the interface is only accessible to individuals who work with the developers. This strategy gives a business complete control over API usage.

Pro tip: You should consider interface stability when an API is made public. Changes to the API, such as adding more parameters to any function, could break compatibility for clients who rely on it.

All open or public APIs features are accessible to the general public and can be used without restriction. The API-related documentation must be publicly available, and the API can be freely used to develop and test applications. Google Maps is a perfect example.

Subscribers to commercial APIs pay a fee to use it. Free trials are a typical strategy used by API publishers to allow customers to test APIs before purchasing subscriptions. For instance, Weather Underground is a commercial API that sells access to its weather data API.

Partner APIs are only shared with business partners who have signed a contract with the API publisher. Software integration between two companies is a prominent use case for partner APIs. An example of a partner API is eBay’s API.

Web APIs allow machine-readable data and functionality to be transferred between client-server architecture. These APIs mostly use Hypertext Transfer Protocol (HTTP) to transmit requests from apps and responses from servers. An example is Mailmodo’s REST API, a type of API protocol.

To use APIs, we must adhere to specific procedures. A protocol specifies the rules for API calls. An API call is a message sent to a server requesting an API to provide information or a service. Let's look at some of the most used API protocols:

Representational State Transfer (REST) APIs are used by apps like Uber, Amazon, and Netflix. You must follow the following requirements for a REST API:

SOAP or Simple Object Access Protocol is a well-known protocol that, like REST, operates as a type of Web Application Programming Interface. According to Microsoft, which created SOAP, it enables the communication between systems over HTTP or the Simple Mail Transfer Protocol (SMTP) for email transfer.

Payment gateways, identity management, CRM systems, and banking and telecommunication services all favor SOAP APIs. One of the most renowned SOAP APIs is PayPal's public API.

The RPC protocol is used to make a remote procedure call. They are the most basic and earliest Application Programming Interfaces available. An RPC's purpose was to allow a client to run code on a server.

GraphQL enables the client to specify the data they require and simplifies data aggregation, allowing the developer to make only one API call to get all the information they require.

Apps that use GraphQL like Yelp, Shopify, GitHub, and Coursera have more control over the data they need from a server, allowing them to function quickly even when the mobile connection is slow.

How does an API work?

The following are some of the use cases of APIs in Mailmodo:

Let’s consider one use case i.e. triggering transactional emails in Mailmodo and see how the REST API works.

Step 3: Choose the email template and select ‘Next’.

Step 4: Add the details of the campaign and select ‘Next’ to trigger it via API. 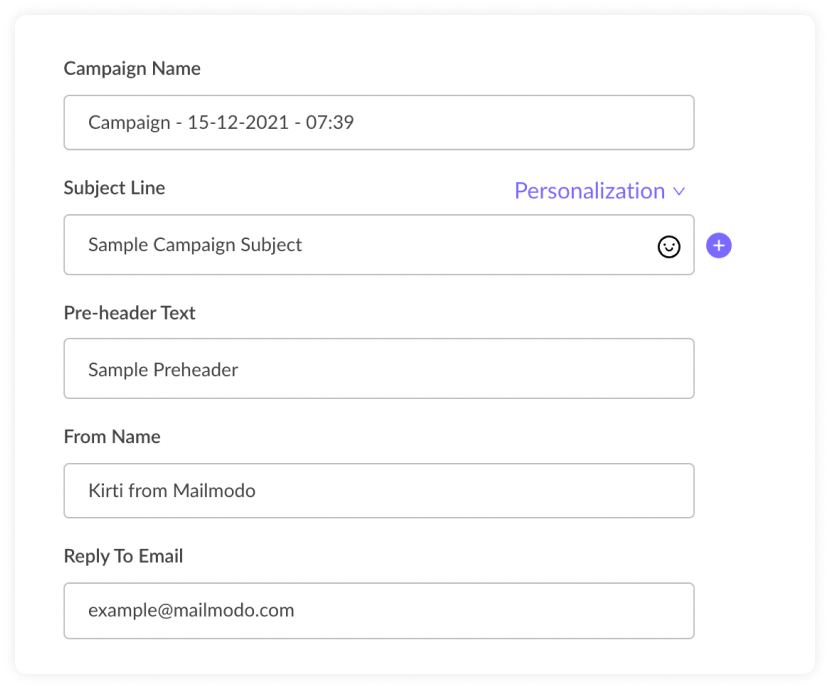 Step 5: Click on the ‘Rest API’ option and select ‘Next’.

Step 6: Review your campaign and select ‘Enable the Campaign’ to get the campaign ID which is your API endpoint.

Step 7: Select ‘Copy URL’ and paste it into your system to complete setting up the transactional campaign.

Sending AMP or HTML transactional emails with Mailmodo's REST API can be done easily, quickly and efficiently. Take inspiration from our guide on 17 AMP email examples to create an interactive email experience with API integration today.

What you should do next

Hey there, thanks for reading till the end. Here are 3 ways we can help you grow your business:

Neelabja has seven years of experience writing data-driven copy around marketing, SaaS, and eCommerce. She's an expert on email marketing and deliverability. Her work has appeared in Oxford Digital Institute, Qrius, and Dailyhunt.

Convert your emails into experiences with interactive AMP elements

You Are Doing Email Personalization Wrong. Here's Why

Why we built Add to Calendar

How to Write a Professional Thank You Email (+ Examples)